How to plan a visual story

Visual stories are a great way to convey a message in an engaging way. Here's a great example of a visual story made by ACT Government on Shootsta:

VARIANTS of the visual story are

The key to an engaging and memorable visual story is a clear narrative structure.👇

How to structure your visual story

The basic narrative structure of a visual storytelling has six parts:

Here is a filled out Video Plan Template using ACT Government's video as an example:

And here are some tips on how you can make it your own:

The set-up is where your story begins, and where you give your viewer everything they’ll need to understand your narrative.

Who is the hero? Whose story are we following through the story? If your story is about multiple people trying to achieve something together, choose one of them to be the focus.

What is the problem? What is your hero trying to overcome, or what need are they addressing? Generally, stories are about a hero trying to solve a problem.

What is at stake? What does your hero have to gain or to lose? Establishing the stakes clearly in the Set-up will help make sure your audience is invested in the hero’s journey.

This is where the story really gets going. Imagine it like a sporting match; if the Set-up is the team preparing to go out on the field, the Kick-off is the moment the match begins. In narrative terms, this might be the first meeting between the two key characters, or the moment when the hero sets out on their journey.

The challenges faced at each attempt/step should become harder and more intense for the hero as they draw closer to their goal.

This is the final hurdle for the hero, one final attempt/step where they either definitively succeed or definitively fail to solve their problem.

This section is all about consequence. Relate it back to the Set-up to show how things have changed as a result of the hero’s success or failure. There will likely be internal changes (what the hero has learned, and how this has affected them) as well as external changes (how the hero has changed their world.) For example, in this section we might see the hero return home from their quest stronger and wiser than when they left, having defeated the threat to their home.

All stories have a message that stems from the hero’s journey. What caused the hero to succeed or to fail? Form your call to action based on this message. For example, charities use stories to deliver emotional messages about the problems they helped people overcome. Their calls to action are based around the ways that the viewer can help the charity to continue their work.

A good mix of visuals, dialogue and sound

Use your video plan to map out the three key tools for telling a visual story: the visuals, the dialogue/script (or other text), and the sound. Most videos will have a balance of these three elements. If you have less of one element, emphasise the other two. For example, in a video with no dialogue, you might need to rely more heavily on the visuals and music to tell your story. 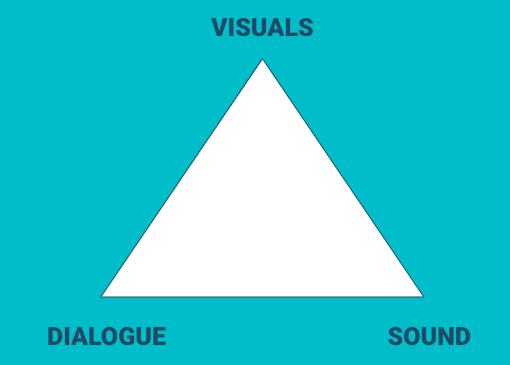 The visuals are the shots you capture. Consider the following as you plan your visuals:

Include or exclude parts of the story carefully to be as efficient as possible. You don’t need to show every part of every action; the audience’s imagination will fill in the blanks. In some cases, excluding some visuals can even tension, suspense or intentional confusion!

Choose language that fits with your characters, their environment, and your brand. Read your script aloud to make sure that the words you’ve written sound natural and authentic. Check out our article on scripting tips for more.

Choose a delivery method that makes sense for your concept. For example, if you want your dialogue and text to feel impersonal, use text on screen or a neutral narrator. If you want the viewer to empathise with a specific individual or a character, consider using your hero as the narrator, or splicing an interview throughout the story.

Match the pace of your dialogue to the feeling you want to evoke. For example, if a scene should feel exciting, the dialogue will likely be faster than it would be in a sad, dramatic scene.

Music is one of the strongest tools you have to guide emotion. Remember that provoking an emotional response is one of the key reasons why you might have chosen to create a visual story in the first place. Think about style, tempo, and instrumentation when choosing the right music for your scene.

Sound effects add information about the action and environment of a scene. It’s not always practical or possible to capture all the sounds you need while filming the scene, so you might plan to add in certain sounds at the editing stage to add more context. For example, the sound of thunder, or of footsteps behind your hero as they walk down a dark alley will significantly impact the feeling of a scene.

Finally, don’t underestimate what you already know. From watching films and television, we all have a sense what we like, as well as what works and what doesn’t. By starting to pay attention to how the stories you watch are told, and to how they make you feel the way you do, you can start to develop your own skills in telling great visual stories.